a good vegan creamer can be hard to find 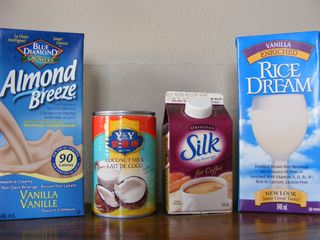 I don't drink a lot of coffee, but when I do, I want to enjoy it to the fullest. That meant, before I became vegan, half and half cream. The best alternative that I've found so far is Soy Silk for Coffee. But unfortunately, only one store carries it in the small town I've moved to, and as it's not within walking distance it has to be picked up for me. (I asked one store who carries Earth Balance to stock it, but they said no.) So, I decided to try the items I photographed on the left with the following results.

Rice Dream? Not much of a dream for me. Too watery in the coffee (which I tend to make strong anyway), and it turned my oatmeal to glue. Next, I tried Almond Breeze, which also proved to be too watery, although better with my oatmeal and I didn't mind the flavour. Finally, I used coconut milk. I have to admit I normally detest coconut, but surprisingly I quite liked the taste and it had a nice creamy texture as well. But, it completely curdled my coffee! Although it kind of looked curdled in the can already so maybe it had gone bad? So back to Soy Silk I guess although I hate bothering people to get it for me, or take regular soymilk (not as good) when I run out. What about you? What do you use?

don't have a cow 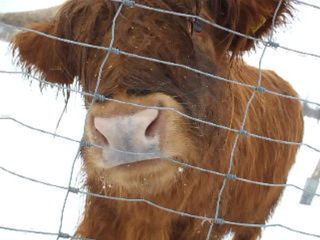 To be honest I never gave this phrase much thought before, but its meaning of "don't get so worked up" is actually kind of funny when applied to animal rights, because that's exactly what we should be doing in my opinion. If enough people DO get worked up, then perhaps real change will eventually take place. And these days when I say don't have a cow, I tend to mean it literally, as in, don't eat 'em! So I'm wondering if vegans can somehow reclaim or sloganize this phrase, snort.

The cow in the photo above by the way is not just some stock image, but a real cow living in Germany that a friend of mine (hi Krissa!) has gotten to know. And she will attest to the fact that this lovely creature is very friendly and will run up to greet her. Sadly though we continue to deny that the emotional and social lives of farm animals are just as real and complex as that of their perhaps cuter or cuddlier counterparts, and maybe in part that explains why some people still feel they have the right to eat these non-human animals. Consuming cows just doesn't get most non-vegan folk as worked up (okay, I SO want to make a joke here, but I'll spare you) as the eating of dogs and cats, but I think that particular indignation (and now I feel like joking about indigestion!) can still be used as a starting point. People love companion animals, and if we can get them to see that eating them is not fundamentally any different from eating farmed animals, then that's one possible way of leading them to veganism.

Incidentally, when I Googled the title of this post, I found an interview with Jeffrey Moussaieff Masson (of When Elephants Weep fame) that's definitely worthwhile reading.

Don't forget to keep checking out the Vegan Slogans page up in the right-hand corner! There you will find the most up to date list. Yes, there are a few in a couple of January posts, but not all of the best or current ones. Also, if you have slogans to contribute, please do!

p.s. I've changed the layout -- do you like the main column better on the right, or left? 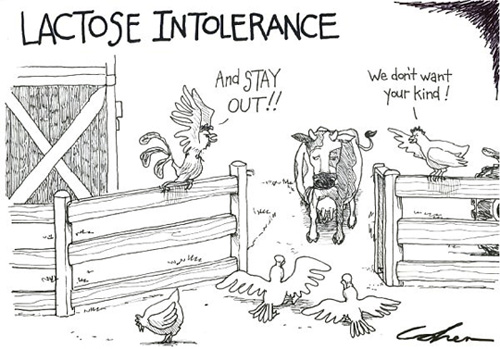 Snort. But I find it funny that people view lactose intolerance as a health problem in need of treatment. Um, maybe the body can't easily digest lactose because we're not meant to be eating dairy in the first place? And ethically speaking, since we shouldn't be stealing milk from animals anyway, shouldn't we ALL be lactose intolerant? Maybe vegans need to reclaim the term! And while we're at it, become egg, honey and meat intolerant as well. ;) I know, many people (including most vegans) don't like PETA (and I don't care for a number of their tactics either), but I DO like this ad. It's an old one apparently, although I only saw it for the first time today, and while I don't know/care who Tito is, I like what he's doing here! And while PETA-bashing may (perhaps even rightfully so) be a popular sport as well, I don't think any vegan would disagree that the blood-sport of dog fighting needs to stop, and whether support for this notion comes from animal welfare or animal rights groups shouldn't matter.

Subscribe to So I'm Thinking Of Going Vegan by Email